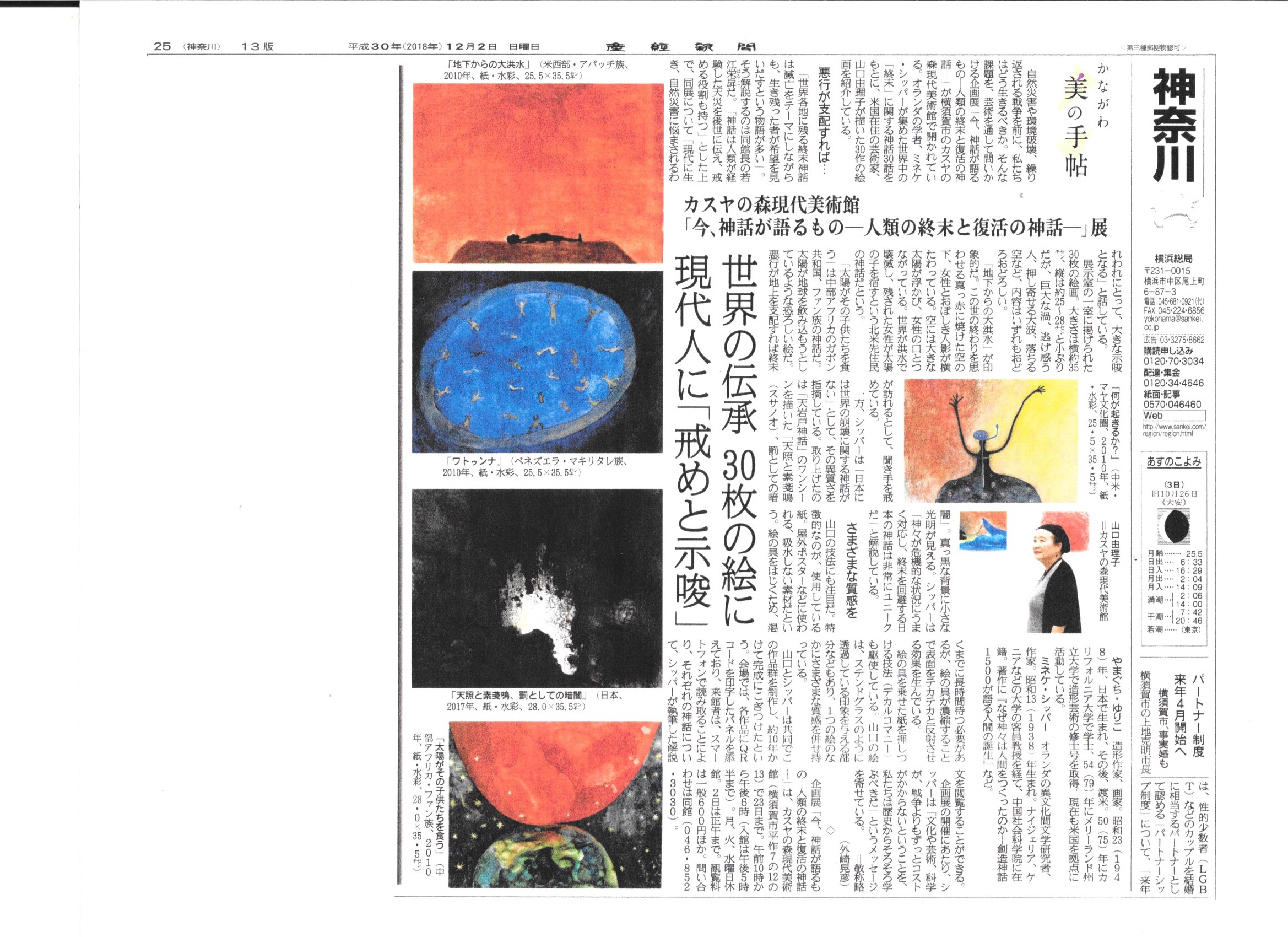 Museum of Haus Kasuya of Contemporary Art in Yokosuga, Kanagawa is running a special exhibition:  What mythologies teach us today, Humanity’s End as a New Beginning.  The purpose of this exhibit is to offer  general public to reflect how we can live in today’s chaotic world with repeated wars, environmental and natural disasters. This is the collaboration of Dr. Mineke Schipper, Dutch scholar who has collected thirty mythological stories that dealt with the End of the World with Yuriko Yamaguchi, who is a contributor of thirty visual images. She lives in the United States.

If bad behaviors dominate the world…..

Most of mythological stories seem to be happy ending by giving a last hope among the limited survivors even though all the existing world mythologies encompass the end of the world as a theme.  This is what Haruko Wakae, the director of the museum explains.  The mythology will play the role of sending messages and warning signs to future generations by telling the all different kinds of disaster which older generations experienced. Based upon this notion this exhibition will be a mile stone  to think about our future for all of us who are agonizing of environmental and natural enormous  problems.

Thirty images, 35cm width and 25-28cm hight, are not large; however, the content threatens  us with a huge whirl pool, people rushing to escape, razing huge wave and falling sky.  “Deluge from the Subterranean” is powerful especially.  There is a woman lying under the burning red sky that gives us the impression of nearing the end of the world.  The large sun in the sky connects to the mouth of that lying woman.  Although the world ends by deluge, that woman conceived a child of Sun that is the Indian American mythology from Apache, Arizona.

“The sun eats his children” is the African mythology from Fang, Gabon.  The image of sun that is trying to swallow earth is very frightening. This is the story to admonish people.

The overwhelming bad human behaviors on the earth will trigger to the end of the world.

On the other hand,  Schipper is pointing out that no mythology about the end of the world exists in Japan.  She inserts one Japanese mythology of Amaterasu and Susanoo, darkness as punishment.  You can see a slight sense of light from the dark background. She comments it is very unique that various gods maneuver  numerous dangerous circumstances in order to avoid ultimate end of the world in Japan.

Yamaguchi’s skill and technique is worth mentioning. The most interesting part is that she is using papers that normally used for making posters for outdoor.  They do not absorb water.  Since they resist water, a certain amount of time is required to dry.  Pigments dry slowly and build up on the surface to make it shiny.  She also employs the technique called decalcomania  that pigmented papers are pressed together.  Yamaguchi’s pictures give a sense of transparency like a stained-glass  sometimes and various sense of touch simultaneously.

It took ten years since Yamaguchi and Schipper started their collaboration.

In the museum people are able to read mythological stories in Japanese via QR code through the use of their own smart phones.

For the introduction for this organized show Schipper highlights this message.

Now is the time for us to learn from history that culture, art and science cost less than war.

Moved to California and received BA at UC Berkeley

MFA at University of Maryland

Active in the US.

Among many publications, “Why Gods made Human beings?’ translated in Japanese

I am an artist creating sculptures and installation work primarily; however, I make paintings and drawings too. I use hand cast resin with stainless steel, copper and brass wires. Also I use Kozo and Gampi and flax paper pulp with wires for some works. I am interested in the idea of interconnectedness of things- human beings with nature, society, science and technologies. I hope I can bring people together regardless of different origin, gender, age through my works.